Piazza Navona, the most beautiful Baroque square in Rome, occupies the area of the ancient "Stadium of Domitian”. It has kept the elongated rectangular shape of the arena, with one of the smaller sides (the northern one) curved, while the surrounding buildings occupy the place of the tiers of the auditorium which could accommodate about 30,000 spectators. The current level of the square is raised by about 6 meters compared to the original one.

The life of the square began in the second half of the fifteenth century, when the market was transferred here. The square was improved with the construction of three fountains, including a water trough, serving the market and the transport animals that flocked to it. In 1644 Pope Innocent X had a building constructed in the shape of several houses already owned by his family: the great Pamphilj palace. The Pope himself arranged the square with the construction of a fountain in the center: initially the project was entrusted to Borromini, but Gian Lorenzo Bernini succeeded in supplanting his rival with a stratagem. The Fountain of the Rivers is undoubtedly one of the most beautiful and famous monuments of Baroque Rome and represents the four great rivers known then, the Ganges, the Nile, the Danube and the Rio della Plata. The presence of the obelisk on the fountain was specifically requested by the Pope.

The other two fountains that adorn Piazza Navona are both works by Jacopo Della Porta: the Fontana del Moro, located on the southern side, whose current form derives from the restoration by Bernini and the addition of a statue in triton marble (mistakenly considered to be Ethiopian) which holds a dolphin alive, and the Fountain of Neptune on the other side of the square which was decorated only at the end of the 19th century with sea horses, mermaids, monsters, dolphins and the god Neptune with the trident.

On the square is the church of Santa Agnese in Agone: the oldest church was replaced by the majestic church commissioned by Pope Innocent X, who is buried here along with other members of the Pamphili family.

Curiosity: for almost two centuries, Pope Innocent X flooded the square on Saturday and Sunday in August to entertain the Romans. A few years before Rome became the capital of Italy, the "piazza Navona" lake was banned and the square was then paved with "sampietrini", and with a donkey-back profile the square became convex rather than concave. The ludic-fair character is reborn during the Christmas period, during the Epiphany, with stalls, toys, "Befane" and "Babbi Natale" 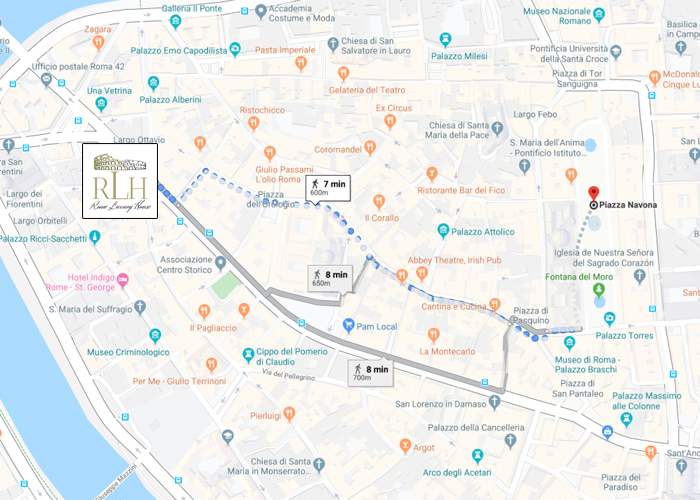