Nearby you can easily reach the Pantheon, originally a small temple dedicated to all the Roman gods (from the Greek pan "tutto" and theon "divino"). Built between 27 and 25 BC by the consul Agrippa, prefect of the emperor Augustus, the Pantheon in 128 AC the temple was rebuilt by the emperor Hadrian in its present form. The Pantheon is a masterpiece of architecture and engineering, with a circular hall covered by a hemispherical dome, preceded by a pronaos of Greek derivation with 16 Corinthian columns supporting the tympanum, which in ancient times was occupied by a high bronze relief depicting the "Battle between the giants and the Amazons". The ceiling of the pronaos was also made of bronze, but in 1932 they were torn off by the canopy of Bernini's altar, inside the Basilica of Saint Peter. The only source of light is represented by an oculus (hole) placed at the zenith with a diameter of 9 meters. the most important aspect of the Pantheon is the relationship with light: at midday the rays of the sun entering from the oculus create a wonderful effect.

At the beginning of the seventh century, the Pantheon was converted into a Christian basilica, some niches were used for the construction of altars dedicated to Christian martyrs. It then became Santa Maria della Rotonda or Santa Maria ad Martyres and inside are the sepulchres of famous people, and artists including Annibale Caracci and Raffaello Sanzio, and home to the tombs of the kings of Italy.

From the Pantheon you can easily reach Piazza Navona, the most beautiful Baroque square in Rome, which occupies the area of the ancient "Stadio di Domiziano". It has kept the long rectangular shape of the arena but the current level of the square is raised by about 6 meters from the original one.

The life of the square began in the second half of the fifteenth century, when the market was transferred here. In 1644 Pope Innocent X had a building constructed in the shape of several houses already owned by his family: the grandiose Pamphili palace. The Pope himself arranged the square with the construction of a fountain in the center: initially the project was entrusted to Borromini, but Gian Lorenzo Bernini, succeeded in supplanting his rival with a stratagem. The Fountain of the Rivers is undoubtedly one of the most beautiful and famous monuments of Rome and represents the four great rivers then known, the Ganges, the Nile, the Danube and the Rio della Plata. The presence of the obelisk on the fountain was specifically requested by the Pope. For almost two centuries the square was flooded on Saturday and Sunday in August to entertain the Romans. A few years before Rome became the capital of Italy, the "piazza Navona" lake was banned and the square was then paved with "sampietrini", and with a donkey-back profile the square became convex rather than concave. The ludic-fair character is reborn during the Christmas period, during the Epiphany, with stalls, toys, "Befane" and "Babbi Natale". Nearby there is also the Campo dei Fiori square, one of the most famous squares in Rome full of charm and history. It has a double soul: in the morning it is a popular market where the voices of the Romans who sell fruit and vegetables resound; in the evening it is a lively square, especially for tourists, attracted by the cafes to eat and drink that surround the square. 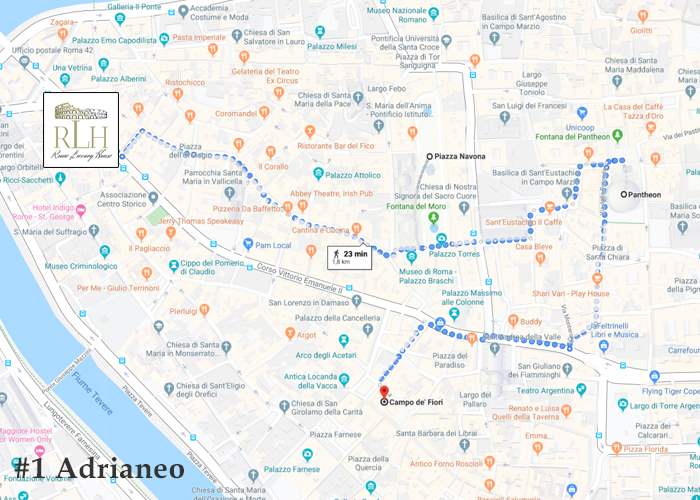