In the heart of Rome, not far from Piazza Navona, is the Pantheon, originally a small temple dedicated to all the Roman gods (from the Greek pan "tutto" and theon "divino").

Built between 27 and 25 BC from the consul Agrippa, prefect of the emperor Augustus, the Pantheon has been the subject of many renovations. In 128 AD the temple was rebuilt by the emperor Hadrian in its present form. Hadrian honored the consul Agrippa with the large Latin inscription on the facade.

The Pantheon is a masterpiece of architecture and engineering and is among the best preserved historical monuments of Rome. The dome was made by mixing concrete with ever lighter materials, from travertine to pumice stone, as we approached the top: this is the secret of its longevity.

The temple is composed of a circular hall covered by a hemispherical dome, preceded by a pronaos of Greek derivation with 16 Corinthian columns that support the tympanum, which in ancient times was occupied by a high bronze relief depicting the "battle between the giants and the amazons ”. The ceiling of the pronaos was also made of bronze, but in 1932 they were torn off by the canopy of Bernini's altar, inside the Basilica of Saint Peter.

The peculiarity is that the inner diameter of the dome corresponds exactly to the height of the temple from the ground and ideally extending the curvature of the vault gives a perfect sphere. The only source of light is represented by an oculus (hole) placed at the zenith with a diameter of 9 meters. The most important aspect of the Pantheon is the relationship with light: at midday the rays of the sun entering from the oculus create a wonderful effect.

Inside the temple there are seven splendid niches, comprised between two Corinthian columns, which originally served to represent the seven divinities connected to the cult of the planets: the Sun, the Moon, Venus, Saturn, Jupiter, Mercury and Mars. When at the beginning of the seventh century, the Pantheon was converted into a Christian basilica, some niches were used for the construction of altars dedicated to Christian martyrs. It then became Santa Maria della Rotonda or Santa Maria ad Martyres and inside are the sepulchres of famous people, and artists including Annibale Caracci and Raffaello Sanzio. The Pantheon was chosen after the Unification of Italy as a home for the tombs of the kings of Italy. It currently houses the remains of King Vittorio Emanuele II, King Umberto I and Queen Margherita of Savoy. 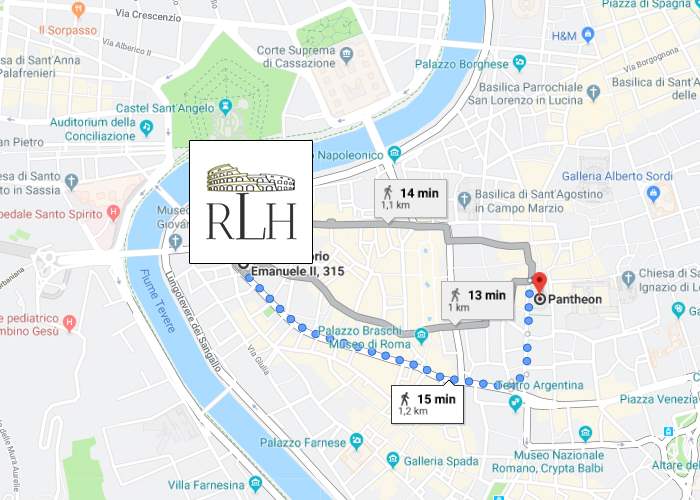