A great Roman villa, the Horti Luculliani, stood at the point where today there is the Santissima Trinità dei Monti church, once "Trinità del Monte". The first part of the church was built between 1502 and 1519 in Gothic style, covered by ogival vaults, but it was too small and cramped. After the acquisition of a series of neighboring vineyards, from 1530 to 1570, a larger convent was built for the French fathers of the Minims and a new church covered by a barrel vault and closed by a facade decorated with two symmetrical bell towers, the work of Giacomo della Porta and Carlo Maderno.

The peculiarity of the two clocks at the base of the bell towers is that one marks the time of Rome and the other that of Paris. The interior of the church is composed of a single large nave on which six side chapels are adorned with valuable works of art, such as the two works by Daniele da Volterra, a pupil of Michelangelo: the famous "Deposition" and "the Assumption ”(where he also portrays his master). An iron gate separates the oldest part. Another unmissable work is the fresco of the Virgin, known as the "Mater admirabilis!" (or "admirable Mother!") and its chapel of pilgrimage.

The Sallustian obelisk was placed in front of the church, almost certainly brought to Rome by Aureliano and placed by these in the Horti Sallustiani. The obelisk, 13.91 meters high and made of red granite, is Egyptian-Roman because it was once engraved in Rome with badly copied inscriptions.

Next to the church is the convent of the Sacred Heart, famous for the scientific studies carried out by the Minims, who set up a rich library in the field of biology, mathematics, physics and natural sciences. Noteworthy is the cloister that can be reached directly from the church or from the entrance to the convent located on the left side of the church.

The construction of the "happy road" between the Pincio and the church of Santa Maria Maggiore entailed such an excavation that to remedy the problem the architect designed and built the stairway with two converging ramps leading to the church: the pillars placed at the two ends of the stairs have the Peretti family crest, the three mountains, and above two capitals two herms with bas-reliefs depicting Saint Louis, in honor of King Louis XII. But the most famous staircase is the one that leads from the Spanish Steps to the church: it was completed in 1726 and alternates curved sections, straight sections and terraces, constituting one of the most representative examples of the last Baroque art, for its spectacular and spectacular taste. The staircase is divided into a succession of ramps of 12 steps each, to which must be added the four initial steps, for a total of 136. At the center of the square there is the famous fountain built between 1626 and 1629 by Bernini, known like the Barcaccia. 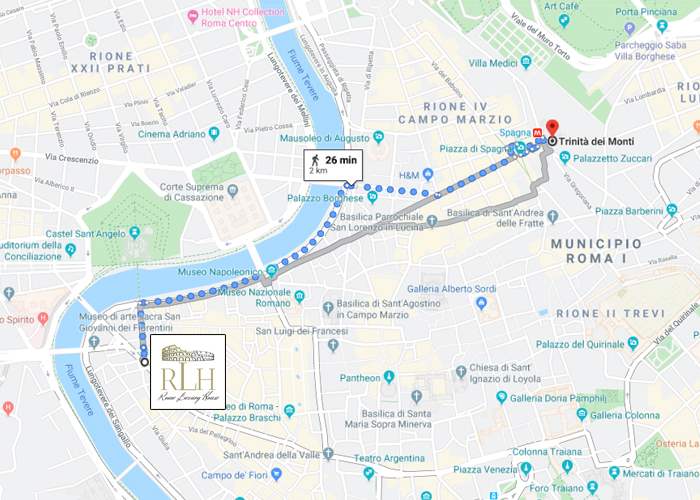