The Ara Pacis Augustae (the Altar of Peace of Augustus) was commissioned by the Senate on 4 July 13 BC and inaugurated on 30 January of 9 BC. It celebrated the pacification of the Mediterranean created by the emperor Augustus after the victorious campaigns of Gaul and Spain. The monument was placed next to the "via Lata", and its current position is not the original one. The first discovery of the Ara Pacis dates back to 1568, when underneath the Palazzo Fiano, nine large sculpted marble blocks reappeared. The finds were divided and moved, for example almost all the parts decorated with festoons that were walled on the facade of Villa Medici, where they are partly still today. In 1859 other archeological finds were discovered, which allowed the German archaeologist Federico von Dühn to correctly identify the monument. The first regular excavations of 1903 ended in 1937 and the recomposition began: Mussolini decided to place the Ara Pacis inside a pavilion and place it near the Mausoleum of Augustus. In 1995 the conditions of the monument were so worrying that the Municipality of Rome decided to replace the case by entrusting the project to the American architect Richard Meier, who used the most advanced technologies and quality materials.

The Ara Pacis consists of a rectangular marble enclosure measuring 11.65 mx 10.62 m, raised on a podium and equipped with two doors on the longer sides, which can be accessed via a staircase. Inside there is the actual altar, elevated on three steps, while another five steps allowed the priest to reach the "table", the floor of the altar on which the sacrifices were celebrated.

The enclosure is divided into two decorative registers: the lower vegetal one, the upper decorative one, separated by a band with a swastika motif. The decoration of the upper area consists of four marble paintings: on the long sides, alongside the two doors, are depicted mythological and allegorical scenes. In those short two historical representations: it is the representation of two groups of characters in a setting that is still uncertain.

The most important is certainly the frieze located to the east in which there are the members of the imperial family arranged in a strict order, with Augusto in the head with a veiled head.

Also the altar bears a carved decoration: on the plinth there are represented female characters in relief, while the upper part, with the sides decorated with spirals resting on winged lions, is decorated with a small frieze that runs all around, both internally and externally, and it represents the "suovertaurilia" (the sacrifice of the pig, the sheep and the bull) on January 30 of each year, on the anniversary of the "consecratio" of the altar. 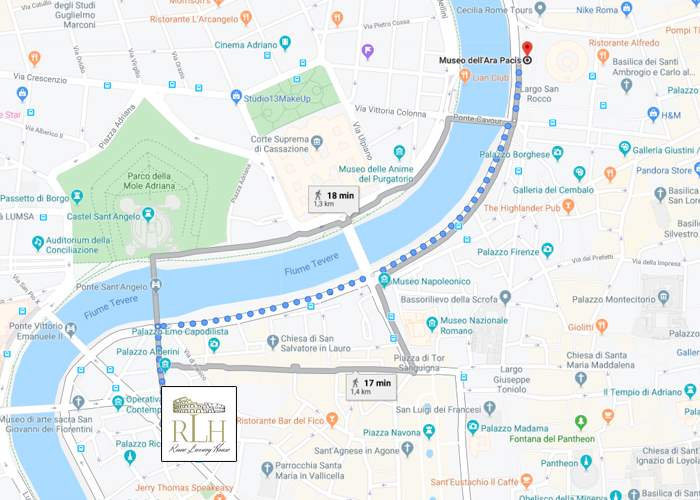