Trastevere is one of the most traditional neighborhoods of Rome and is named after it because it is on the other side of the river opposite the historic center. It is considered to be the most fascinating district of Rome with its medieval alleys and palaces, the cobblestones, the artisan workshops, the trattorias and a lively nightlife.

Home of memory and history, a film festival during the summer - the botanical garden and, finally, the walk on the Gianicolo.

To start, the most vivid advice is to walk among the ancient streets to get to know the soul of the place, become part of it and discover your favorite corners.

Piazza Santa Maria is the inevitable, necessary stop, which includes a visit to the adjacent basilica and its fountain - one of the oldest in Rome -. To admire the medieval mosaics illuminated by the sun.

Piazza Santa Cecilia and its basilica, for the frescoes by Pietro Cavallini. Especially if you love painting and art history. But anyone, we are sure, will appreciate the white marble statue of Santa Cecilia from 1600, sculpted by Maderno and considered one of the most representative works of Baroque sculpture.

A walk to Piazza San Callisto and Piazza Trilussa is also recommended. It is here that street artists are often found playing music for passers-by. And it is also one of the many places in Rome that you will recognize if you have seen the movie “La grande bellezza”. If you go in the spring, opt for the aperitif - the sunset in Trastevere, a glass of wine or Spritz, the lively streets of the neighborhood, and so you will have had almost all the relaxation that Rome can offer.

In other words, Trastevere is like a special island of the capital because it enjoys an autonomous and authentic identity. 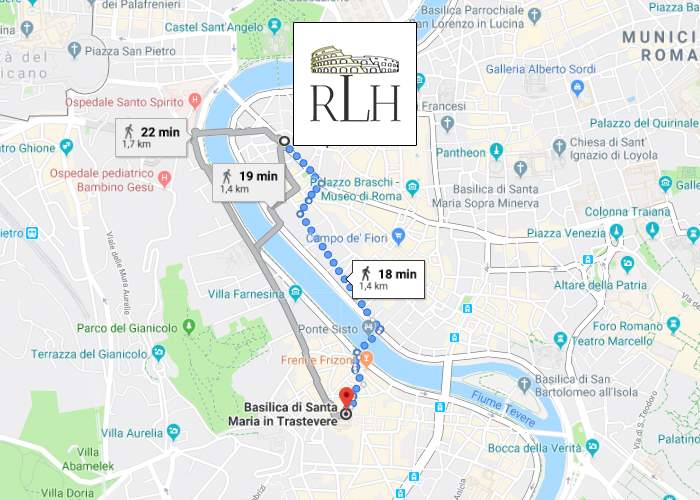