The Basilica of Saint Peter in the Vatican rises in the place where, according to tradition, the apostle Peter suffered martyrdom and was buried in 64 AD. Below the area there is the previously pagan necropolis where Peter himself was buried, and nearby the Christians began to be buried. In 160 AD in this place a double aedicule was built to honor the saint, who immediately became a pilgrimage destination.

And it is above the aedicule that the emperor Constantine, converted to Christianity, in 318 AD builds a large basilica in honor of the apostle St. Peter, known as the Constantinian Basilica. The plan was a Latin cross with 5 naves, and the altar was placed in correspondence with the underlying Tomb of Peter.

Due to the state of neglect of the Basilica, in 1506 Pope Giulio II entrusted Bramante with the project for a new Basilica, which would replace the previous one. The Pope wanted a church with a Greek cross plan surmounted by a huge dome at the tomb of the Saint, along with four smaller domes and four bell towers at the corners. Antonio da Sangallo, Carlo Maderno and Gian Lorenzo Bernini collaborated in the construction of the church.

The project then passed to Michelangelo, who eliminated the bell towers. When even Michelangelo died the dome was finished by Giacomo Della Porta and the entire work was completed in 1626. The facade is articulated by giant order columns and surmounted by statues depicting Jesus and eleven apostles (without Saint Peter). Under the facade develops the arcade and 5 doors that allow access to the Basilica. The rightmost door is the bronze Holy Door (made by Vico Consorti in 1950, donated to Pope Pius XII).

In 1667 Bernini completed the arrangement of the area in front: the oval-based area was enveloped by a colonnade of Doric order in trabeation-shaped porphyry and removed from the facade with the insertion of a straight square with a trapezoidal shape, which gave an illusion perspective of depth and balance between the forms. In the colonnade the columns are radially arranged in rows of 4 for a total of 284 columns which progressively increase in diameter, to keep the proportions unchanged with the rows of more external columns.

Inside the Basilica of Saint Peter there are unique masterpieces, many of which by Bernini.

The Vatican Museums were founded by Pope Julius II in the sixteenth century, occupy much of the vast Belvedere courtyard and are one of the largest art collections in the world.

Absolutely not to be missed 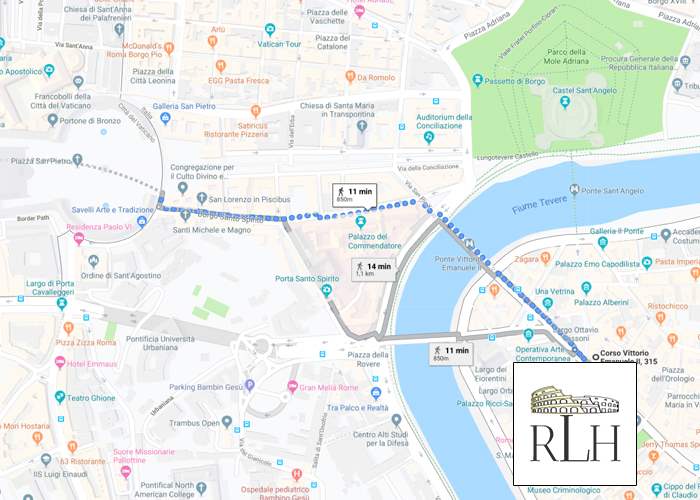